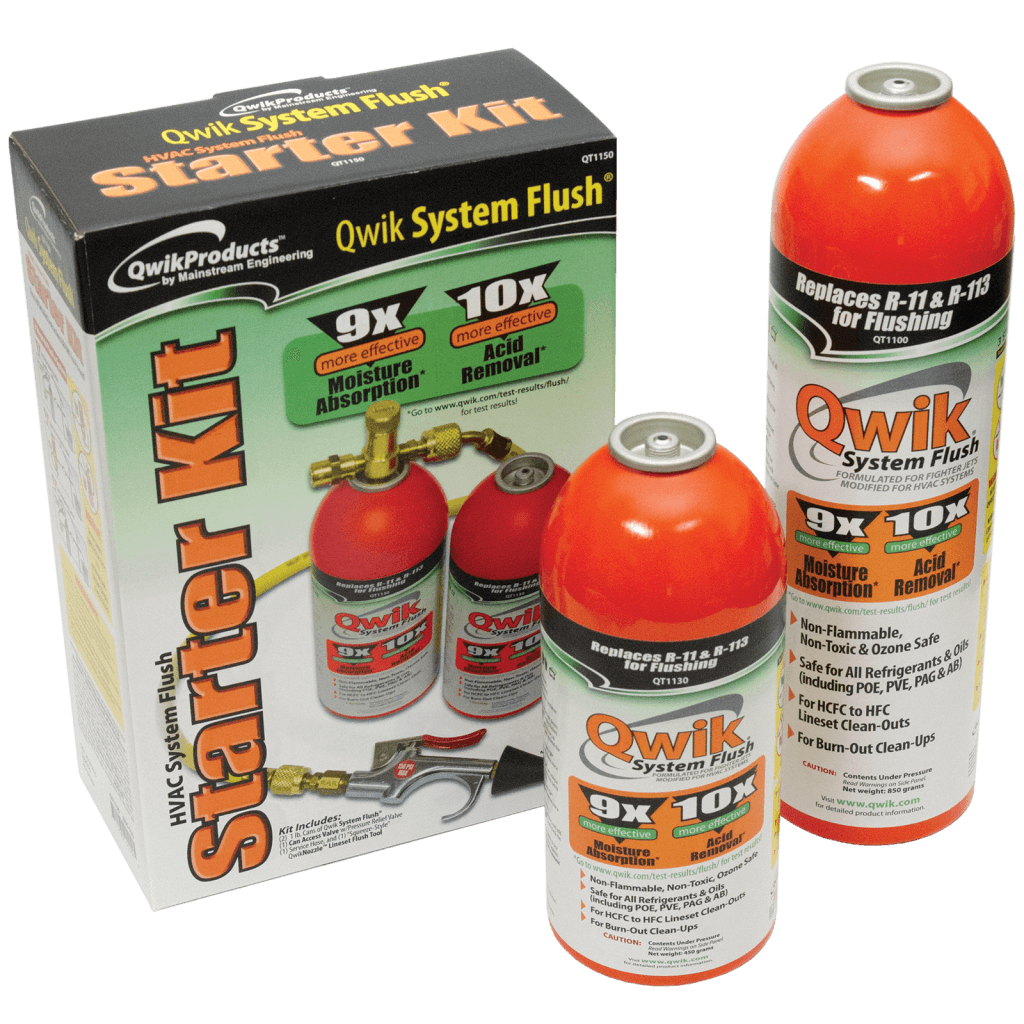 How to use Qwik System Flush®

Why Pay More... for Less? Take a moment to compare the SDS for Qwik System Flush® side-by-side with that of Rx11-flush® ... doing so can save you a ton of money!

Why use Qwik System Flush®?

The following equipment is required for each flushing operation:

WARNING: Never connect Qwik System Flush® to a manifold set or to a nitrogen tank! The can will explode if pressurized! 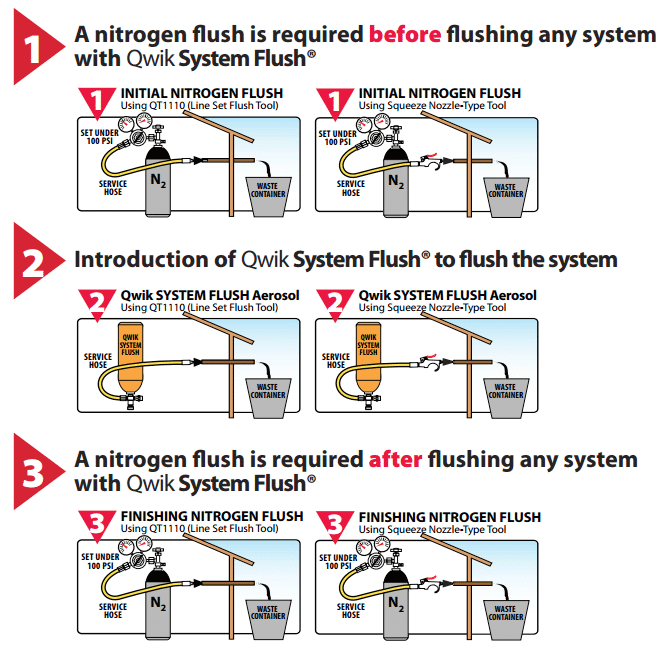 Can I flush the evaporator coil with a system flush?

Yes, but do not flush through the TXV or capillary tubes. They may become clogged with particulates.

Can I get multiple uses out a single can of Qwik System Flush®?

Yes, if you do not use the entire contents of the Qwik System Flush® can, simply twist the knob on the can access valve counter-clockwise to close the valve or remove the valve entirely because the can has a self-sealing cap.

Can I use Qwik System Flush® to flush out a condenser coil?

Yes, Qwik System Flush® can be used to flush out a condenser or evaporator coil. If you do not replace the condenser coil after a compressor burnout, it should be flushed. Remember, you should never flush through a TXV, orifice plate, capillary tube, or filter drier because particulates may clog the small orifices in these components. Also, NEVER flush through a compressor because this will remove oil from the surfaces within the compressor which is necessary for proper lubrication.

How do I dispose of the used Qwik System Flush®?

When flushing, place a bucket (or container of some sort) outside the building to catch the waste ( always flush from the inside to the outside of the building). Dispose of the flushed waste in accordance with local, state, and federal regulations.

How do I know how much Qwik System Flush® to use?

I have a can access valve from a different manufacturer – will it work with the Qwik System Flush® can?

I’ve heard that Qwik System Flush® (Qwik-SF®) was difficult to remove from a refrigeration system because of a higher boiling temperature during evacuation. Can you expand on this please?

This question is one we hear a lot because one of our competitors is claiming that they evaporate faster and that therefore they are better. Mainstream has provided independent lab test results which show that we clean better than all the other competitors tested. *View Qwik-SF lab test results >> Before reviewing these test results, let's think about the cleaning process itself.

If the cleaning product evaporates too fast then it does not have time to dissolve the oil and other impurities, it simply vaporizes and boils off without soaking into the liquid residue and without flushing the liquid waste out of the system. This is not good! Alternatively, we have specially engineered our patented Qwik System Flush® so that it does not evaporate too fast at atmospheric or higher pressures, so that it has time to soak into the oil and other impurities, dissolve them by diluting them, and flush them out of the system as a liquid waste.

Remember, the oil will never evaporate, and if the cleaning solution evaporates before it flushes the waste products out of the system, it will simply redeposit the waste products in another part of the system. Clearly not good! Instead, to properly clean and flush the system, the cleaning product must dissolve and mobilize the impurities, carry these solid and liquid waste products out of the system as a liquid waste stream. The minimal Qwik System Flush® residue that might remain in the system, is completely removed by the evacuation process, prior to refrigerant charging. Even a slight vacuum of only 2 - 3 inches of mercury vacuum would completely evaporate any residual Qwik System Flush®!

As you can see, the logic that you want a very fast evaporating cleaner is simply wrong. What is important is that the cleaner remain a liquid during flushing and then totally evaporates when evacuated. This is exactly what Mainstream's Qwik System Flush® does and is one reason why it flushes better than the other products tested.

Another point to consider is that all other flushes are simply degreasers, they are designed to remove oil, sludge and particulates. But what about the acid and moisture that remains on the metal surfaces? If acid and moisture are not removed, the fresh refrigerant charge will be contaminated with acid and water. Look at the independent, third party test results (performed by a testing lab and a university), we are much much better at removing acid and moisture, because Qwik System Flush® was specifically designed to remove acid and water in addition to sludge, oil and contaminates.

Qwik System Flush® is simply a better product at a better price. We have been shown to absorb water and acid as well as flush impurities, and this product is protected by US Patents #7,566,409 and #7,736,537.

Is Qwik System Flush® safe to use?

Do not breathe any brand of chemical flushing agent, refrigerant vapors, industrial cleaners, or even high concentrations of nitrogen if you are pregnant.

Is the QwikProducts™ Can Access Valve different from the valve I already have?

The Can Access Valve is made in the USA and features durable brass construction. In addition, the Can Access Valve is designed with an integrated pressure relief valve, which prevents accidental over pressurization of the can and also provides an audible alarm if the access valve is inadvertently hooked up to a source of high pressure (such as a nitrogen tank). For safety reasons, regardless of whose can access valve you are using, you should confirm it has an integrated pressure relief valve.

What happens when a compressor burns out?

When a compressor burns out, the oil becomes extremely acidic and if all this acid is not removed when the compressor is replaced, the elevated acid levels will attack the new compressor and cause another compressor burnout. Premature compressor burnout after a prior burnout is quite common, because of residual acid. Acid cleanup normally involves changing the compressor oil and the refrigerant to reduce the acid level (and changing the hermetic or semi-hermetic compressor if it did burn out). Unfortunately however, removal of the oil contained in the compressor does not remove all the oil or acid in the system since acid is carried throughout the vapor-compression loop by the flowing refrigerant and therefore acidic oil or its residue is throughout the system. This residual acid has been shown to shorten the life of the system since this residual acid will lead to accelerated acid formation in the system. This has been supported by experimental evidence in the literature that after a burnout the frequency of subsequent burnouts increases.

Why don’t you sell Qwik System Flush® as an unpressurized liquid, like other manufacturers?

The unique patented Qwik System Flush® formulation has been specifically engineered to remove moisture and acid while other flushing agents do not remove these impurities. However, the ability of Qwik System Flush® to absorb and remove moisture from surfaces of a system being cleaned, also means that the Qwik System Flush® will absorb moisture from the air, if left exposed to the air. Once an unpressurized can of liquid flush is opened and partially used, air enters the can to replace the volume of flush that was used. Ambient air is loaded with moisture, and if the flushing compound was designed to absorb moisture, the flushing compound left in the can would become saturated with moisture.

Clearly the moisture absorbed from being exposed to air reduces the effectiveness of the remaining flush, and using a flushing agent that is saturated with moisture could actually add moisture to the system, rather than remove it! This is of course not a problem in the pressurized aerosol Qwik System Flush® can because the Qwik System Flush® is never exposed to air, except after the flushing process is completed.

Why is it necessary to flush the old line sets when converting from R-22 to R-410A?

When retrofitting R-22 systems with the newer R-410A systems, the best practice is to replace all components in the system, including the line sets, to assure residuals do not contaminate the new system. However, situations exist where it is uneconomical to remove line sets, such as when they are recessed inside finished walls, or under concrete foundations and/or slabs.

In these cases, it is imperative that you flush the old line sets with Qwik System Flush® to remove the residual oil, acid, and moisture! Otherwise, these contaminants in the old lines will cause problems in the new system. Residual mineral oil and contaminates from the old system can contaminate the polyolester oil in the new R-410A system, forming a viscous sludge. Residual acid will continue to cause problems with a new system and moisture will accelerate the future formation of acid. Qwik System Flush® is the only flushing solution specially formulated to remove acid and water in addition to oil, sludge and contaminants.

In addition, if the oil line sets are located under the slab or in the walls of an air-conditioned house, where they can become cooler than the surrounding outdoor air, those tube runs can condense significant amounts of water, if these lines are left exposed to the air for any significant time during the change out. Never leave the line-sets open to the air and use Qwik System Flush® to get all the contaminates including acid and water out of these lines.

Why should I use Qwik System Flush® to clean out a system after a compressor burnout?

When a compressor burns out, highly acidic oil is formed. Although the majority of the oil remains in the compressor (which will be removed and replaced), some oil is always present in the plumbing and remaining components in the system. If you are changing the entire system, including any piping between components in a split system, then there are no issues. However, if you are not replacing the piping between components or other parts of the system, then you must flush those components with Qwik System Flush® to remove the residual contamination from the burn out. However, never flush a compressor or filter drier, and always back flush components whenever possible.

For more information on how to use Qwik System Flush® after a compressor burn out, see the Instructions link on the product page.

How to use Qwik System Flush®

Why Pay More... for Less? Take a moment to compare the SDS for Qwik System Flush® side-by-side with that of Rx11-flush® ... doing so can save you a ton of money!

Why use Qwik System Flush®?